Perfect for camping fans and those that love road trips!  ROAD LESS TRAVELED Warmer-  Get hitched! Modeled after the classic RVs that once ruled the highways and bi-ways, this retro Warmer. 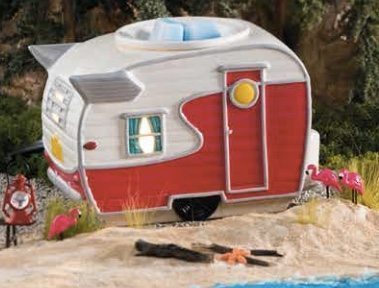 Camping is an elective outdoor recreational activity. Generally held, participants leave developed areas to spend time outdoors in more natural ones in pursuit of activities providing them enjoyment. To be regarded as “camping” a minimum of one night is spent outdoors, distinguishing it from day-tripping, picnicking, and other similarly short-term recreational activities. Camping can be enjoyed through all four seasons.

Camping may involve sheltering in the open air, a tent, caravan, motorhome, or primitive structure. Luxury may be an element, as in early 20th century African safaris, but including accommodations in fully equipped fixed structures such as high-end sporting camps under the banner of “camping” blurs the line.

Camping as a recreational activity became popular among elites in the early 20th century. With time, it grew more democratic, and varied. Modern participants frequent publicly owned natural resources such as national and state parks, wilderness areas, and commercial campgrounds. Camping is a key part of many youth organizations around the world, such as Scouting, which use it to teach both self-reliance and teamwork.