This skull warmer represents the “day of the dead” look and design. The skull warmer design is also called “sugar skull” 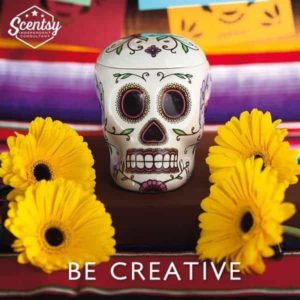 Day of the Dead Skull Warmer – Available September 1st. Come back here to visit and order your Scentsy Skull warmer! I suggest getting a couple if you intend to gift to someone. These warmers are very popular and will most likely go on back order quickly.